Black Friday. The day after Thanksgiving in America, has recently been the big ‘save the date’ day in the diaries for shoppaholics and savers alike. With big discounts hitting the highstreets and online stores. People are getting bang for their buck – and just in time for Christmas.

When we think of Black Friday, infamous images flood our minds. Of queues, riots and fighting in Costco over the last TV . Or maybe you think of the wholesome images of hundreds of shoppers. Flooding shops and spending money to get the retailers “in the black” for the year. (This is an accounting term for profits as red mean a loss and black is a profit).

What it is that comes to mind when you think of Black Friday, we’ve realised that most people don’t actually know the true history about the ‘sale day’, but you definitely should. 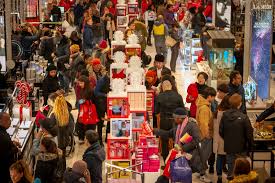 The Origins of Black Friday

Black Friday’s origins go way back to the 60’s. When two ruthless Wall Street financiers – Jim Fisk and Jay Gould. These two businessmen bought copious amounts of the US gold, hoping to create soaring prices and thus huge profits. On Friday 24th September, 1869, the gold market crashed leaving Wall Street Barons bankrupt. The day itself was dubbed ‘Black Friday’. This was because when the Wall Street crash of 1929 happened, the subsequent days were named ‘Black Monday’ and ‘Black Tuesday’ . So it became a nickname for these catastrophic days.

This became the first term ‘Black Friday’. However it wasn’t for years later until the day we know as ‘Black friday’ became associated with that name. 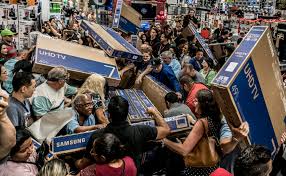 The History of Black Friday

The link between the Crash and the day we all know can be dated back to when shops in the US recorded their accounting. They noted their losses in red and profits in black. Thus after thanksgiving when there were reductions on items, the mass purchasing of the sales meant the shops were ‘in the black’ (making a profit) after being ‘in the red’ (making a loss).

There have been many accounts of Black Friday being a day where Southern plantation owners could buy slaves at a discounted price following Thanksgiving in the 1800s, however this is inaccurate. It is highly unlikely that the term originates from then as the term came about a long time after the slave trade was abolished in the US.

So when did the term cotton-on?

In Philadelphia around the 60’s, 70’s, the day after Thanksgiving became notorious. Mainly for bringing in crowds of tourists and shoppers after the Army-Navy football match. These people crowded and queued throughout the city, Meaning police had to be on watch. These policemen were unable to take the day off due to the amount of traffic and work on the day. The policemen sarcastically dubbed the name ‘Black Friday’. As for them it was a long, hard shift full of calming crowds and rowdy people searching for the thanksgiving sales.

After a publication in the local newspaper with the title “Black Friday”, highstreet shops started to adopt the name and use it themselves to market and advertise their sales after thanksgiving.

Soon it became a tradition in America that the Friday after Thanksgiving would be named that. Highstreet shops adopted the practices and slashed prices on this day to attract customers to the low priced goods – hoping to make a profit.

In 2012, Amazon brought the Black Friday tradition over to England and the rest of the UK, and soon enough the Black Friday extravaganza got bigger. It comes to this day that most stores partake in the sales, no matter how big or small.

That’s right, even here at Number1Plates we have got some fantastic sales for you to shop through. From up to 60% off plates and accessories, to free plates worth £60 with every private registration!

Shop yours today… and don’t miss out on this fantastic weekend!