Recently I was kindly given the new MINI Electric for a few days by Sandal MINI Wakefield; to see what I thought of the latest variant of their electric hatchback. As a MINI owner, with my 4th on the way, I was given the keys to see what I thought of the ‘electric way of life’. I’m not going to be comparing the car to other electric cars in the market as I don’t know what they’re like to live with but what I am going to do is compare it to the standard MINI hatch, of which I’ve owned a few… 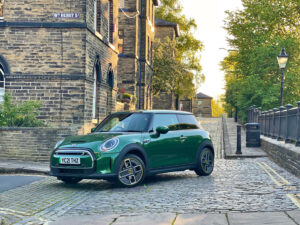 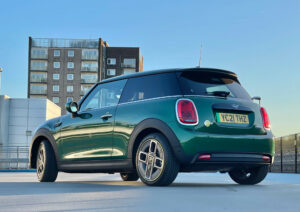 I arrived at the Sandal MINI Wakefield dealership on 18th May. As I pulled into the car park, I could see a British Racing Green MINI Electric glistening in the sun over in one of the electric charging bays of the dealership. I had a walk inside to be nicely greeted by a member of their team, who handed me the keys in a sanitised cloth. They set me on my way with all that I needed to know. I was so pleased to see that it was an LCI 2 car; only recently launched by MINI with the updated styling, interior and infotainment. This is something that hasn’t gone down too well with MINI owners, but I personally love the changes and find that it suits the new MINI Electric so well!

I turned the ignition on; what a weird experience that was! The only sound to be heard was the futuristic-chime that echoed through the cabin upon starting it up. I pulled away (turned the radio off for full effect) and set off to my house in West Yorkshire. In low speed, a whirring effect is pushed out of the exterior of the car (to give pedestrians a little warning that you’re around). I’ll be honest, I panicked a little when I saw that 100% battery would only provide 88 miles of range, however I relaxed as this rose up to 120 miles within 5 or 10 minutes on the road.

This car only had around 600 miles so it hadn’t done many charging cycles; I’ve heard that the more charging cycles is does, the more the range increases – and significantly so!

I quite quickly got used to how the car behaved, apart from the lack of sound. The MINI Electric didn’t feel too dissimilar to my JCW Hatch, the steering was ‘typically’ MINI, the throttle response was touchy and wow; the power! I’d say around town and in the suburbs, the MINI Electric is OUTSTANDING when it comes to acceleration providing that ‘MINI Go-Kart’ feel. Put your foot down and this thing goes!

I’d definitely say you feel it most when you’re cruising at 40mph and you see the national-speed-limit sign ahead, the little time it takes to get from 40-60mph is incredible. The instantaneous torque the electric-motor produces is priceless, even when in the GREEN+ setting. Talking of settings, the car has 4 different styles; GREEN+, GREEN, MID and SPORT. All MINI owners will be familiar with the final 3, but the MINI Electric introduces GREEN+. This setting increases the range by shutting down things which aren’t as critical – such as climate control.

This car was the first MINI which I’ve been able to drive with the latest ‘digital dash’ that was first seen on the MINI Electric back in 2019. The system is clear, bright and provides all of the relevant data needed for a comfortable drive. My Level 2 car was equipped with lane keeping assist, radar guided cruise control and traffic sign recognition. All 3 of the systems worked seamlessly on the digital dash, with no focus taken off the road ahead. The new design steering wheel, featuring in cars from 2021, felt great in the hands, with chunky 10-2 bolstering and gloss black controls for cruise control and infotainment. 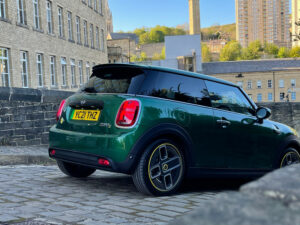 Charging the MINI Electric was simple to do. MINI supply you with an AC – AC cable and a 3-pin-plug for your standard UK wall sockets. I charged it at home overnight, which was easy to do! The new ‘MINI app’ on iPhone and Android kept me up to date with all necessary things such as; the charging progress, doors, lights and mileage information.

I ventured into Leeds one day and found free charging in the John Lewis centre; this was made easy by the MINI’s navigation system showing me exactly where to park. I plugged in and off I went! I returned to a fully charged car, all for the cost of a few minutes downloading the Pod Point app. The only other charging I did was at The Trafford Centre, a short 50 mile journey away but I managed to find the SLOWEST chargers in the UK – I think. Meaning that it only gave me an extra 15 miles in range. As annoying as it was, it only meant that I had to charge on the way back to dropping the car back off at Sandal MINI Wakefield. It was rainy and dull, with heavy Friday afternoon M62 traffic so I felt like a rest was deserved anyway! I stopped off at Ainley Top services, plugged the car in (for free again) and went for a sit down in Starbucks (not so free). After half an hour, it gave itself another 30 miles for the 10 mile journey – as I didn’t want to give the car back with no range. 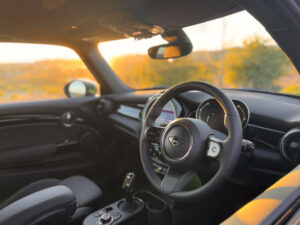 I wasn’t going to do much of a feature on how the car handled. However, I feel like I owe it to MINI. The car is undoubtedly a MINI, with sharp responsive steering and that true feeling of knowing exactly where all four tyres are on the road (Goodyear Eagle F1’s to be exact). You could throw this thing into the corners and it somewhat felt more stable than the normal hatch, the added weight over the centre of the car via the batteries may have created better weight distribution across the front and rear axles.

My Verdict: If you’re in the market for a new MINI or even a new hatchback, then I would honestly look no further from the new MINI Electric. Yes, they start off at a slightly pricey £28.5K. But… the savings you could make on getting it from A to B are enough to lead me down the electric route. Charging it is easy, it turns heads, it’s got a superb automatic transmission, it’s quietness in the cabin is second to none, it’s speed – wow, it has a true MINI Go-Kart feeling. These are enough to put me onto looking for one in the near future. I couldn’t recommend it enough!

If you want to test-drive the NEW MINI Electric then be sure to contact Sandal MINI to see what they can do for you; you won’t be let down.

A big thank you to Yasemin at Sandal for giving me the opportunity to drive the car, as it really has changed my opinion on the future of motoring. 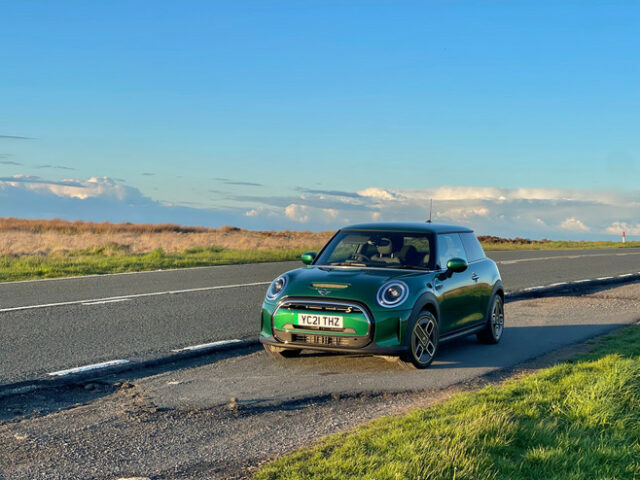 With the current year steaming ahead of us, quicker than we could imagine, we thought it would be insightful to take a l...
Read More

The Amount of Electric Vehicle Ch...

The need for adaptability in an ever changing climate is more apparent than ever, electric vehicles are one of the w...
Read More

MINI Electric Review; The Official Guide. Recently I was kindly given the new MINI Electric for a few days by Sandal MI...
Read More

History Behind The Notorious Day The day after Thanksgiving in America, has recently been the big ‘save the date’ d...
Read More