Mazda are one of the world’s largest manufacturers of motor vehicles, and were founded in 1920. The company has stated that the name ‘Mazda’ came from the name of the God of Light “with the hope that it would brighten the image of these compact vehicles”.

A Brief History On Mazda

The company originally began as a cork-making factory (called Toyo Cork Kogyo) in Hiroshima. They moved from manufacturing machine tools to vehicles with the introduction of the Mazda-Go auto rickshaw.

In 1931, Mazda introduced the three-wheeled Mazda-Go truck. It was so successful that Mazda produced only that model for the next 14 years!  They did however go on to make and sell many vehicles, and other things including their engineering of the Wankel Rotary Engine, which set itself apart from other Japanese competitors.

Mazda faced their first downfall at the onset of the 1973 oil crisis, as more and more people were turning to vehicles with better fuel efficiency rather than the rotary engine which had become synonymous with the Mazda name. The company saw further loss in 1975 due to over-reliance on the US market, being the least-efficient automaker in Japan and a tarnished name. Saved by Sumitomo Bank, Mazda turned their attention to tuning and perfecting the rotary engine, rather than making it a mainstream option, along with producing an increased number of lightweight models.

They quickly bounced back, and evidence suggests that over the long-term, Mazda has done impressively well – especially compared to other similar competitors. In 2020, Mazda was announced as the 22nd largest vehicle producer worldwide, selling 1.42million vehicles worldwide between May 2019 and April 2020!

Over the years, Mazda vehicles have been featured numerous times in popular culture, such as in the Fast and Furious film franchise and the Need For Speed video game series.

Perhaps the most famous Mazda model, the MX-5 is the Japanese manufacturer’s small, compact convertible sports car, which has been in production since 1989.

Well noted for its lightweight, nimble and minimal complexity, the MX-5 was widely considered as one of the best in class, compared favourably to the likes of the Lotus Elan, Fiat 124 Spider, BMW Z3, and latterly, the BMW Z4.

The nippy roadster holds the title for the best selling two-seat convertible sports car ever, with sales of well over 1million units worldwide.

Here at Number 1 Plates, we can offer bespoke Mazda number plates for two generations of the MX-5. The 2004-15 variant can display a rear plate which measures 547mm x 168mm, with 2016-19 models able to show one which is 707mm x 128mm. If you’re interested in a custom Mazda number plate, then head over to our Plate Builder and design yours today!

In 2020, Mazda announced a new, all-electric model, the MX-30. The crossover blends a small SUV and sports car feel, and comes complete with the ‘suicide doors’ previously seen on the RX-8. With starting costs of around £26,000, consumers will be impressed by Mazda’s impressive eye for detail and generous equipment provided as standard.

Mazda claims it will achieve 124 miles on a charge, which isn’t the best range in class, but should still see you comfortably through the week if you’re predominantly driving around town! 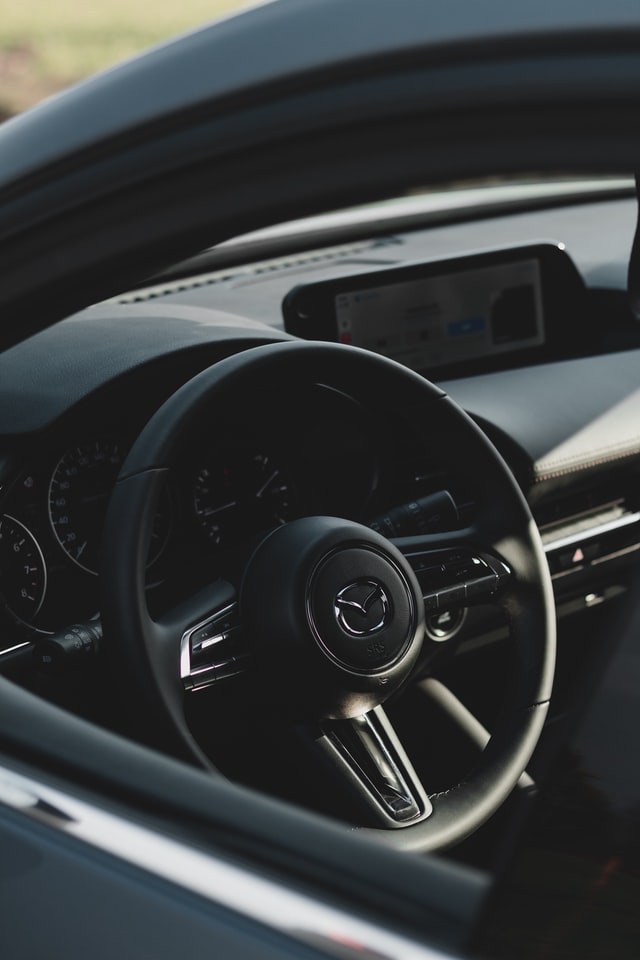 What size are Mazda number plates?

Of course, all Mazda cars in the UK can fit standard UK plates measuring 520mm x 111mm, but as mentioned previously, we’re able to offer a number of different sized number plates for Mazda vehicles, including the Mada2, Mazda3, Mazda6 as well as the MX-5 and CX-5. The largest of these custom Mazda plates is for the 2013-16 Mazda3, which can display a rear plate which measures 759mm x 149mm.