The History Of GB Number Plates

Number Plates – When and Why Were They Made?

From the turn of the 20th Century, it became apparent that cars and vehicles were becoming increasingly popular. With manufacturers appearing all over the world and the UK’s economy rising almost 50%, it comes as no surprise that Brits were turning from horses to motor vehicles! In fact, by the end of 1904 there were around 23,000 motors in the country alone.

With so many vehicles on the move, there were accidents and casualties happening more often than not. Apart from the Locomotive On Highways Act of 1896, there were few limitations and restrictions on vehicles as they hadn’t been necessary before, however with the increase of motors the government had recognised that something needed to be put in place. 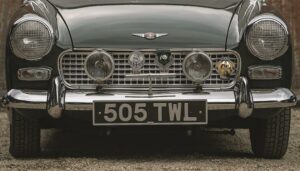 With the increase of vehicles and, in turn, the number of incidents, it became increasingly apparent that some form of identification was needed for vehicles and their drivers. In came the Motor Car Act 1903, which had originally been introduced five years before by the Dutch. The main aim was to introduce identification to vehicles and drivers by mandating the display of registration marks.

The registrations were made up of up to 3 letters of a local council code which was followed by any random number combination, e.g. ABC 123. The first ever registration mark was simply “A1”, and was given to Earl Russel, who was so eager to be the first to receive one that he camped outside to ensure he was first in the queue!

Issues came about when it was realised that there were two sets of each number for cars and motorcycles – which meant that two individuals could have the exact same number and letter arrangement, which for obvious reasons caused confusion and problems!

Furthermore, local councils had to register all vehicles, assigning a separate number to each vehicle. This meant that all councils were given an individual ‘code’ (a series of characters) to assign to the motorists in their district. For example, Liverpool’s exclusive characters were KA, and so anything which had those at the start, began to Liverpool.

Things started to get confusing however, as if a vehicle travelled from one area to another, the plate would have to be changed. The vehicle would receive a new plate and the old plate would be reassigned to somebody else’s vehicle. As it sounds, it was too confusing, so the 1920 Roads Act put this to a stop! 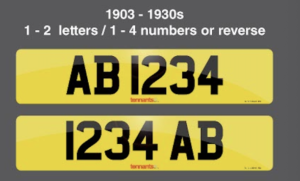 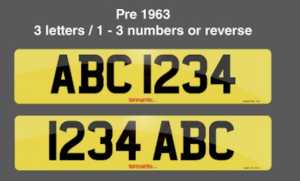 Throughout the 1950’s, due to an increase in the average wage and the price of cars dropping drastically (thanks to mass production technology), there was a vehicle boom. Most families across Great Britain had a car. With the increase of car ownership, came the increase of vehicle registrations. It soon put a great deal of pressure on local councils as they just couldn’t keep up with the amount of numbers needed – they were running out. The government had to act quickly and change the format of registration numbers so that there would be enough to go around!

1973: The aesthetic of the plates was to change, from the ‘vintage’ style of white or silver numbers on a black background, to become the plates we know today with black digits on yellow and white plates. Silver and black plates are still legal for cars licensed before 1st January 1980. One reason as to why number plates are yellow and white is that they allow drivers to instantly recognise if they’re looking at the front or the back of the car! Yellow and white with black characters were chosen as the DVLA found that these were the easiest colours for the human eye to read.

1974: Local councils were relieved of registration duties when a centralised DVLA system was introduced and running well.

When the Suffix system had reached its lifespan and all the numbers had been used up, a new format was needed.

With this, the government implemented the prefix system, which quite simply moved the letter (which indicated the year) to the start of the registration number: 1983; “AXXX 111”. So to break the plate down, the first letter is the year when the car was registered. The last 2 letters indicate the area code of where the car was registered.

Not all numbers were put on vehicles, as a large number of them were held onto by the DVLA for later release or for personalised registrations. Within 20 years, the system had been exhausted and so a new format was again needed!

Styles changed on number plates not just because of the exhausted prefix style, but also because studies found that witnesses – especially in hit and run incidents – could remember the letters easier than numbers on the perpetrator’s vehicle. With us reading from left to right also it made sense to alter the arrangement of the plate.

Of course, just with most things in life, there are certain plates which are more desirable than others. For instance, old plates with limited digits, registrations that spell out names etc. Over the years, buying and selling number plates has become more and more popular, with thousands of people in the market. It is fascinating to see how far something so simple has come!