We have everything you need to find you your perfect private reg!

Are you wondering how to get private number plate or thinking of buying a private plate? If you’re reading this, then the answer is probably yes! Whether it’s for your own use or as a gift for a loved one, a private number plate is a way to make any vehicle it’s assigned to stand out from the crowd while adding somewhat of a personal touch to it. Fortunately, we have a wide range of personalised registrations and private regs available in a number of different formats and combinations of characters.

Of course, every vehicle has its own registration plates upon manufacture, but these plates often hold little to no significance to the vehicle’s owner, nor does it hold any form of financial value. This is one of many reasons why people come to us on a regular basis looking for personalised registrations, and why so many people have private car number plates. With more than 50,000,000 different private plates to choose from, there’s something for everyone in our database; if you’ve come to our website today looking for private plates for sale, we’re confident you’ll be able to find the perfect private reg for you. 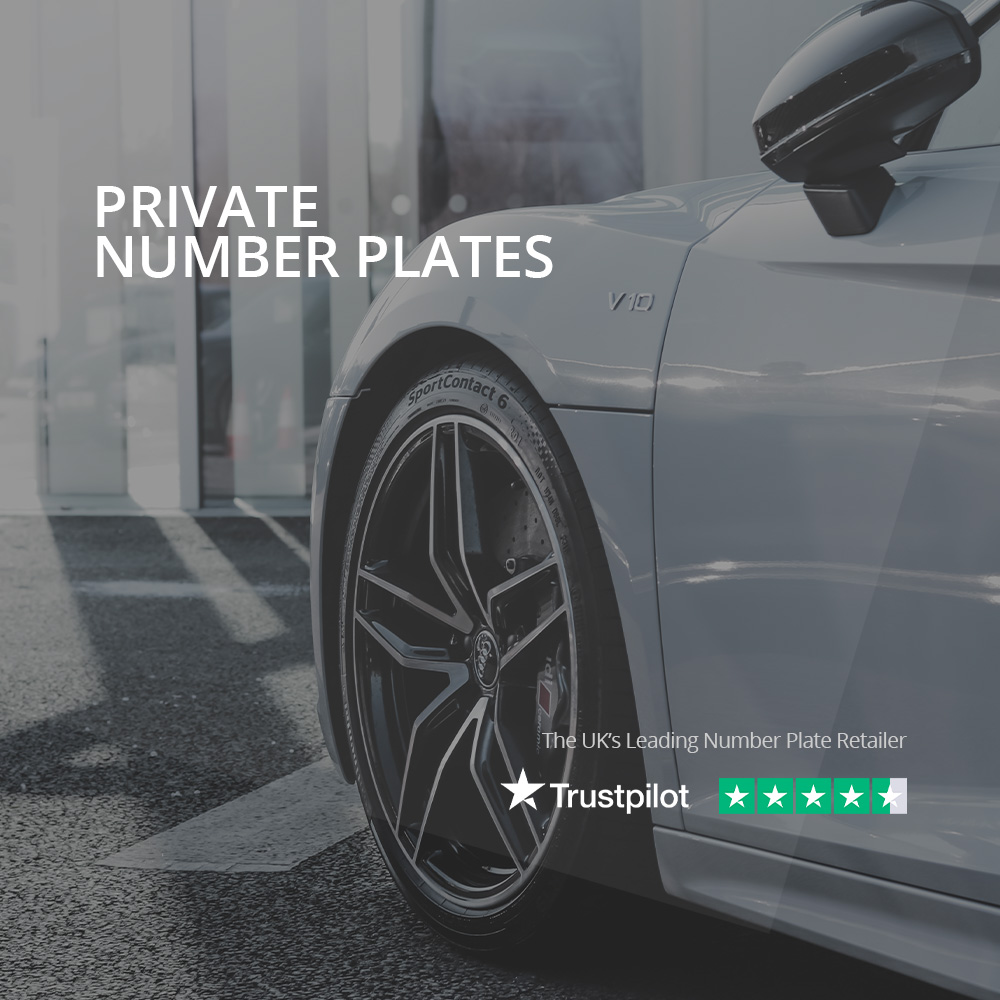 There are five types of private registration plates available to buy, some with formats dating back to the early 1900’s! Read on to find out more.

Cherished (dateless) – Dateless format registrations first appeared in 1903, and were assigned to new vehicles until 1963. Typically, the format of these registrations started with one, two or three characters, which were regional identifiers, which was followed by one, two, three or four digits. This layout was reversed in order to extend the lifespan of the dateless format.

Suffix – Suffix registrations appeared in 1963, following the discontinuation of the dateless format. Suffix style reg plates consist of three characters followed by a space, and then one, two or three digits, and then finally a character. For example, XYZ 321A is a suffix registration, with the final character being the age identifier. Any plate with ‘A’ as the final letter first appeared in 1963, with Y being the last letter used in 1982.

Prefix – Prefix registrations were introduced in 1983 and ran until 2001. In the case of prefix registration plates, the age identifier letter came first, followed by three numbers, a space and three letters. For example, A123 XYZ would be a prefix style registration, which could have first appeared in 1983. Similarly to suffix plates, the letter Y was the final one used in this type of registration in 2001.

Irish – First issued in 1903, Northern Irish registrations always contain a ‘Z’ or ‘I’, or sometimes both. Just like cherished registrations, Northern Irish plates do not have a specific year associated with them, which means they can be assigned to any age of vehicle.

Current – In 2001, the prefix style was replaced by the current system we have in place today! In this format, there are two letters, which are regional identifiers, two numbers, which symbol the year the car was registered, followed by a space and then three randomly assigned letters. For example, a car which had the registration YD53 KMX would have been registered in Leeds, Yorkshire between September 2003 and February 2004. In relation to the age identifier, there are two released per year. September 2001 saw ‘51’ used, with March 2002 seeing the first ‘02’ plate, followed by a 52 in September 2002, and so on. In 2021, the registration identifiers are 21 and 71.

Here at Number 1 Plates, we have a wide variety of private number plates for sale, spanning all different formats of number plates. Why not search for your perfect personal plate today?

Of course, when you’re assigning your registration, you’ll need to ensure that you have your private plates made to go on the car or vehicle. Fortunately, we can help you with this with the aid of our private number plate maker. Our Plate Builder tool allows you to create your own private plate design using the new personalised registration you’ve just bought! On our private plate maker, you’ll find hundreds of different options available to choose from, including standard sized plates, model specific shapes, hex and diamond plates, as well as different text options such as 3D Gel and 4D Matte variants. This will allow you to get you private plates printed or made to your exact specifications. So, once you’ve purchased a private registration from us, give our private plate creator a go and create your own number plates which perfectly fit on your car, van or motorcycle!